Sink your teeth into a colorful array of tomato varieties, and the difference in flavor from one to another is obvious and delightful. But what about spirits made from different varieties of grain? Could different barley varieties provide the basis of distinctively flavored whiskeys?

About forty attendees gathered at Hidden River Farms outside of Montesano, Washington, to learn about just that. One possible outcome of the work might be the release of a barley variety specifically suited for craft beverage markets.

Shauna Stewart, Executive Director of the Olympia-Lacey-Tumwater Visitor and Convention Bureau, told attendees that the majority of tourists today are travelling for food-related experiences. With strong partnerships up and down the supply chain, such products could create a lucrative market at a time when many grain farmers in south Puget Sound are idling combines due to poor prices and lack of markets.

“Craft spirits, distinguished by variety and region,
could be very attractive to visitors to the region,”
– Shauna Stewart 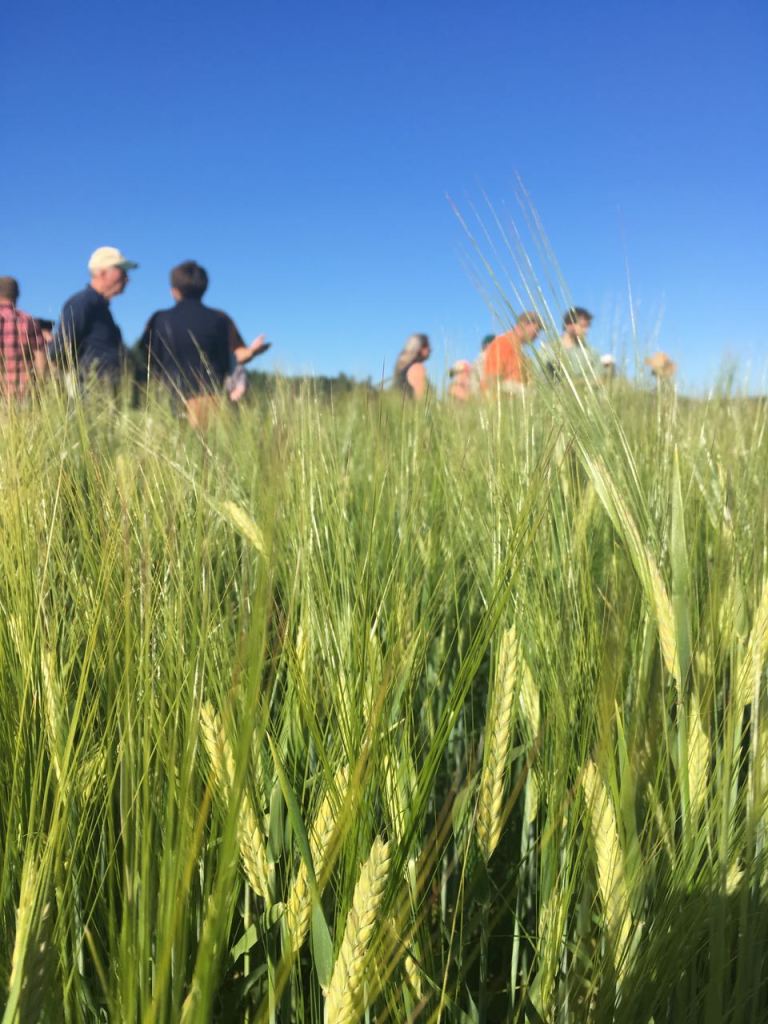 During the event, attendees learned about the end-use characteristics and agronomic performance of seven barley breeding lines and two named varieties. Planted to a total of a half-acre each, upon harvest the varieties will be divided out across a micro-malting facility at Oregon State University; Sandstone, a micro-distillery in Tenino; and a University of Wisconsin lab for analysis. Most of the harvest, about 1,000 pounds of each variety, will go to Sandstone for distilling.

Following distillation at Sandstone, samples of the unaged whiskey will be sent to Tom Collins at the WSU Richland Wine Science Center. Collins’ team will evaluate the product for differences in flavor compounds using GC-MS analysis, followed by evaluation by a sensory panel. The unaged spirits will provide the best opportunity to detect impacts of variety on flavor, before barrel aging introduces variables that could mask subtle differences.

Ultimately, the research team wants to cultivate interest among producers and consumers of craft beer and spirits, and translate that interest into a high-value specialty market tuned in to the contribution that distinctive grains make to craft beverages.

Hidden Valley Farm is the site of a research project, supported by funds from the Center for Sustaining Agriculture and Natural Resources BIOAg program, to evaluate germplasm in the WSU barley breeding program for craft malting, brewing and distilling. With a little work, market development, and a lot of supply chain teamwork, researchers also hope the work supports development of a high-value market for western Washington grain farmers.